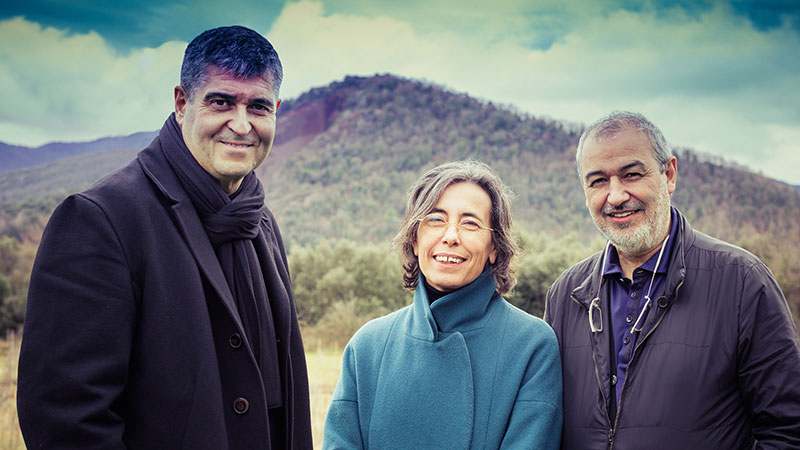 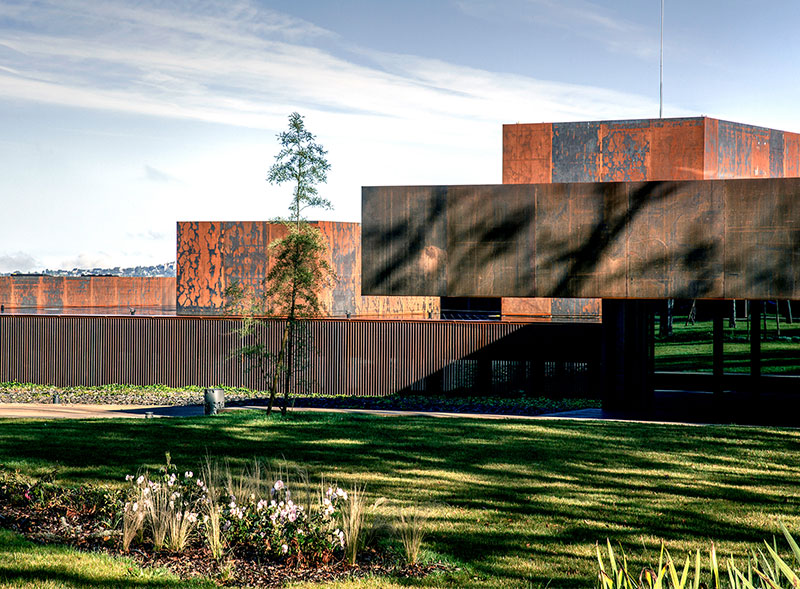 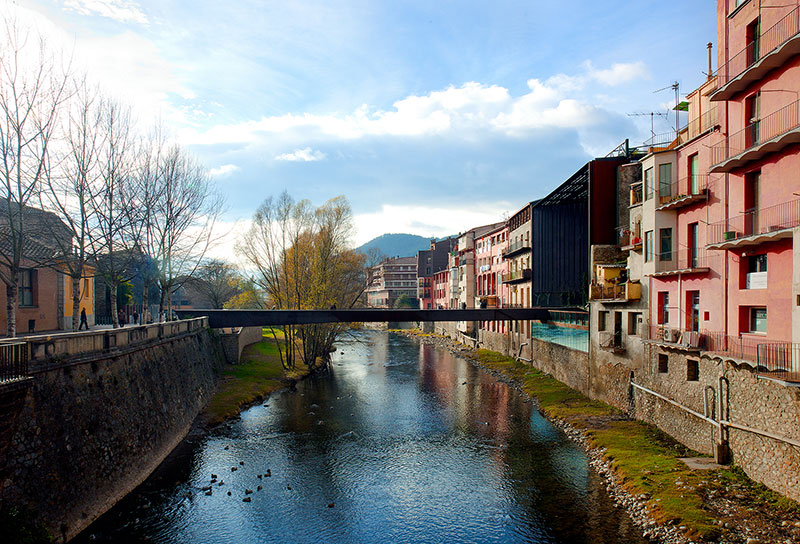 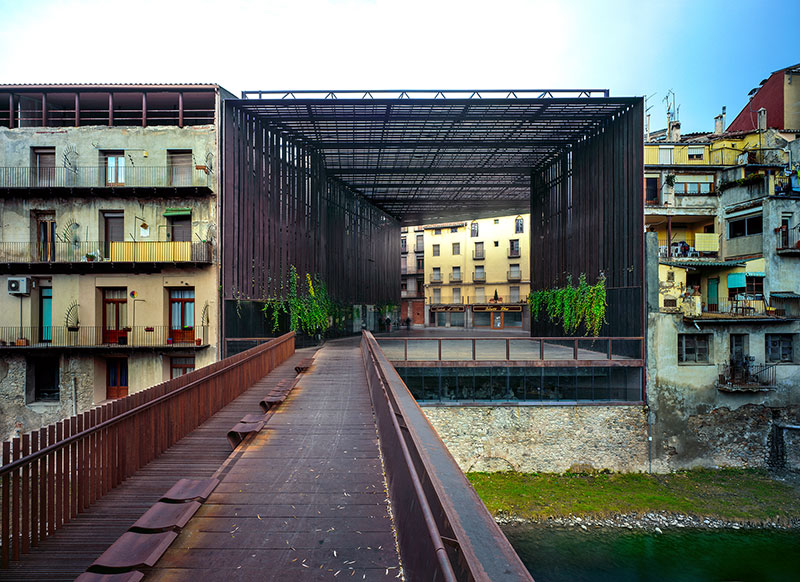 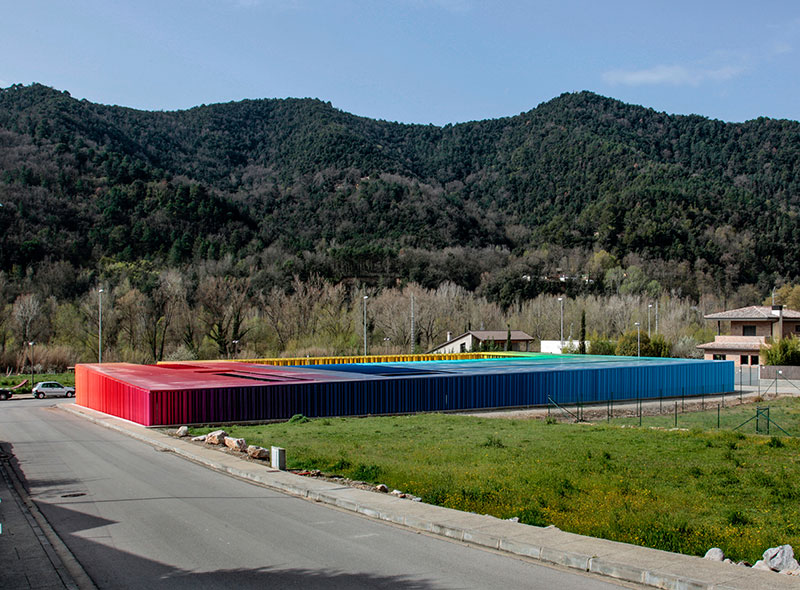 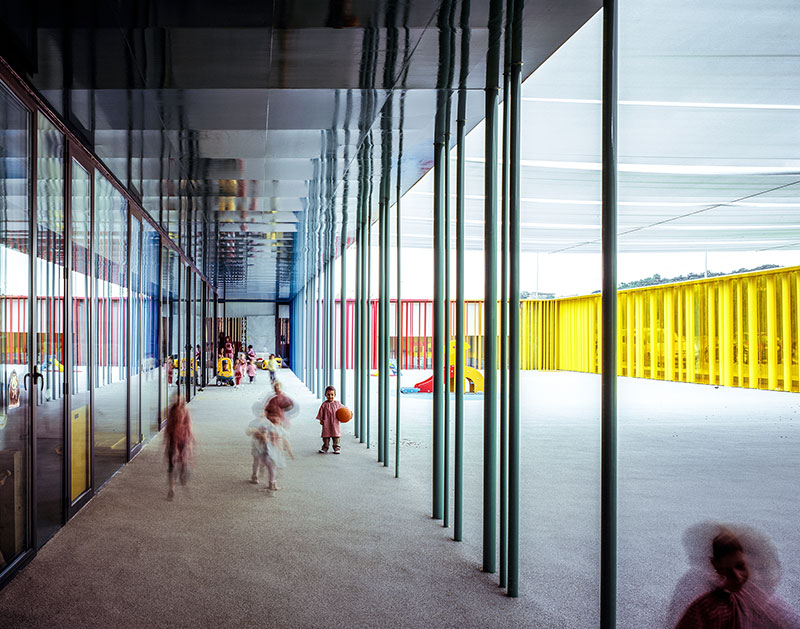 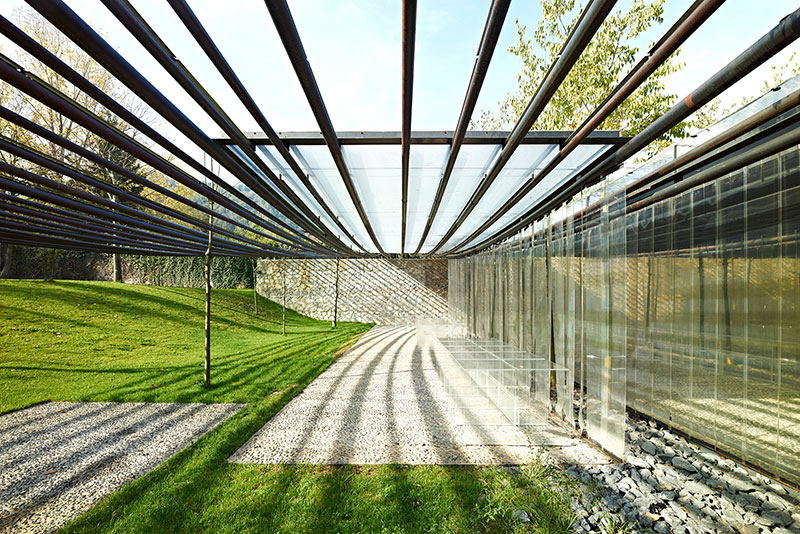 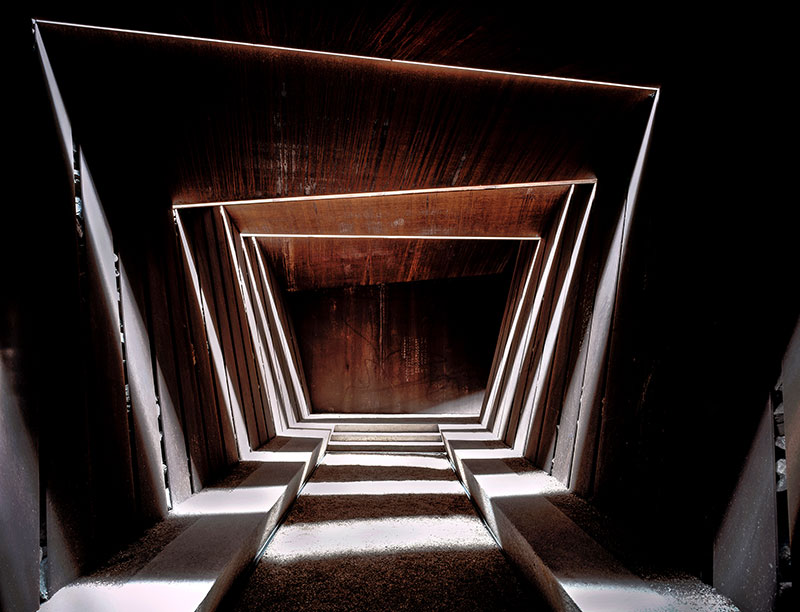 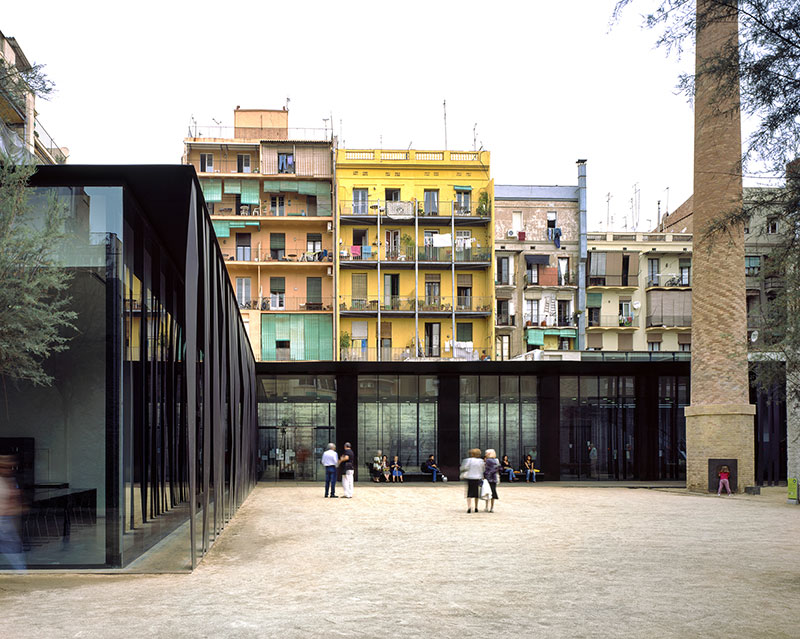 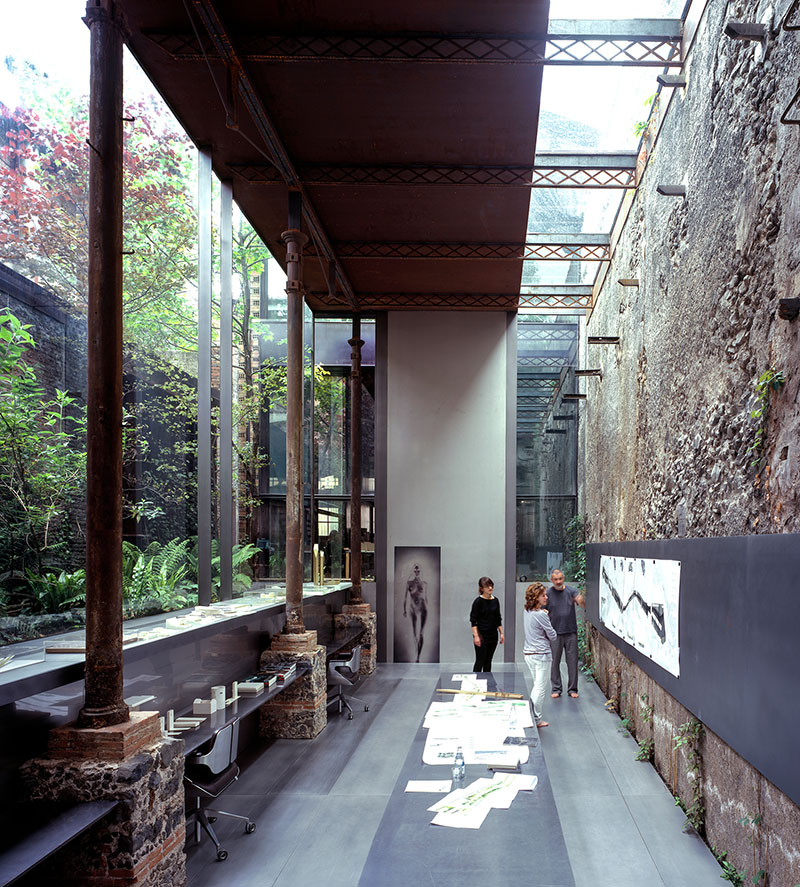 Rafael Aranda, Carme Pigem and Ramon Vilalta, three architects who have worked closely together for almost 30 years in a deliberate and thoughtful approach to architecture are recognised with the 2017 Pritzker Architecture Prize. Their works admirably and poetically fulfil the traditional requirements of architecture for physical and spatial beauty along with function and craftsmanship, but what sets them apart is their approach that creates buildings and places that are both local and universal at the same time.

They established their office, called RCR for their three first names, in Olot, their hometown in the Catalonian region in the northeast of Spain, resisting the call of the metropolis in favour of remaining closely connected to their roots. The process they have developed is a true collaboration in which neither a part nor whole of a project can be attributed to one partner. Their creative approach is a constant intermingling of ideas and continuous dialogue.

All their works have a strong sense of place and are powerfully connected to the surrounding landscape. This connection comes from understanding – history, the natural topography, customs and cultures, among other things – and observing and experiencing light, shade, colours and the seasons. The siting of buildings, the choice of materials and the geometries used are always intended to highlight the natural conditions and pull them into the building.

The Bell-Lloc Winery (2007), in the town of Palamós, near Girona, Spain, for example, a building embedded in the ground, is about the soil that produces the grapes, the cool dark cellars needed for the ageing of wine and the colour and weight of the earth. The extensive use of recycled steel fuses the building with the earth and the openings between the steel slats allow in hints of light.

The marquee (2011) creating an outdoor dining and event space at Les Cols Restaurant in Olot is another example of the fusion of landscape and minimal modern materials to create a useful and popular venue. Some have said that they are reminded of places for countryside meals with family and friends. The space fits into a valley carved out in the landscape by the architects. Strong walls of volcanic stone support a light weight and transparent polymer roof to protect against rain and sun. The furniture and vertical hanging blinds that can sub-divide the space are also of clear plastic, which puts the emphasis on food, festivities and the natural setting.

In other works, such as their own office (2007), a former foundry built at the beginning of the 20th century, the juxtaposition of past and present is undertaken in a most thoughtful, clear and respectful way. Just as exterior and interior are closely intertwined in their works, so are new and old. All of the original industrial building that could remain, was left ‘as is’.

By adding new elements only where needed and in contrasting materials, the architects demonstrate their love for both tradition and innovation. The resulting building, which they call Barberí Laboratory, is comprised of varied, flexible and highly functional spaces. While Rafael Aranda, Carme Pigem and Ramon Vilalta have a deep sense and knowledge of history, they use materials and modern construction to create spaces that could not have been created before.

Community is another word that comes to mind when speaking of the work of Aranda, Pigem and Vilalta. Both in the bright and colourful nursery school in Besalú, Girona, El Petit Comte Kindergarten (2010) and the Sant Antoni – Joan Oliver Library, Senior Citizens Center and Cándida Pérez Gardens in Barcelona (2007), those who will inhabit the buildings are at the forefront of their concerns. It is obvious when seeing the rainbow colours of the tubes that define the exterior of the school that this is for children’s enjoyment, creativity, and fantasy. The library, a commission won through a competition, as are many of RCR’s projects, is situated within the fabric of an existing city block, is a needed amenity in this busy part of Barcelona. Visitors are welcomed into the library. The richness and variety of spaces invite exploration and are casual enough to create a relaxed and friendly atmosphere. The library also acts as a gateway to an interior courtyard. The senior citizens centre looks onto this space where children, library goers, neighbours and seniors can mingle.

The architects have also tackled important works outside their home in Catalonia. They have built in Belgium and France. The Soulages Museum (2014) in Rodez, France, for example, houses the works of the abstract painter Pierre Soulages and forms a symbiosis with the artist, who seems to paint with light. This building of steel and strong geometric shapes cantilevers over the site, seeming to defy gravity and like many of their other works is in dialogue with the landscape. The architects have sought to create “a space that is as close to nature as possible, enhancing our sense that we are part of it.”

In this day and age, there is an important question that people all over the world are asking, and it is not just about architecture; it is about law, politics, and government as well. We live in a globalised world where we must rely on international influences, trade, discussion, transactions, etc. But more and more people fear that, because of this international influence, we will lose our local values, our local art, and our local customs. They are concerned and sometimes frightened. Rafael Aranda, Carme Pigem and Ramon Vilalta tell us that it may be possible to have both. They help us to see, in a most beautiful and poetic way, that the answer to the question is not ‘either/or’ and that we can, at least in architecture, aspire to have both; our roots firmly in place and our arms outstretched to the rest of the world. And that is such a wonderfully reassuring answer, particularly if it applies in other areas of modern human life as well.

Each building designed by these architects is special and is uncompromisingly of its time and place. Their works are always the fruit of true collaboration and at the service of the community. They understand that architecture and its surroundings are intimately intertwined and know that the choice of materials and the craft of building are powerful tools for creating lasting and meaningful spaces. For these reasons, exemplified in all their built work, and for their ability to express the local, but also the universal, uniting us with one another through architecture, Rafael Aranda, Carme Pigem and Ramon Vilalta are awarded the 2017 Pritzker Architecture Prize. 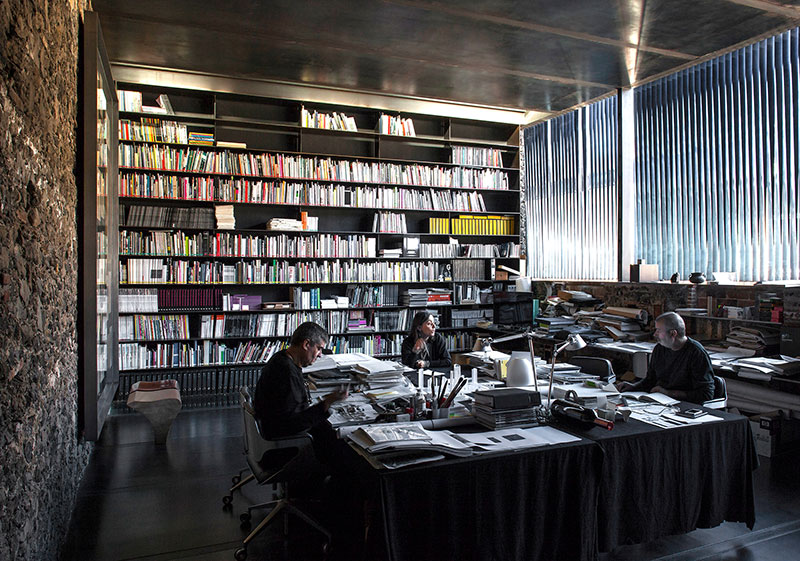