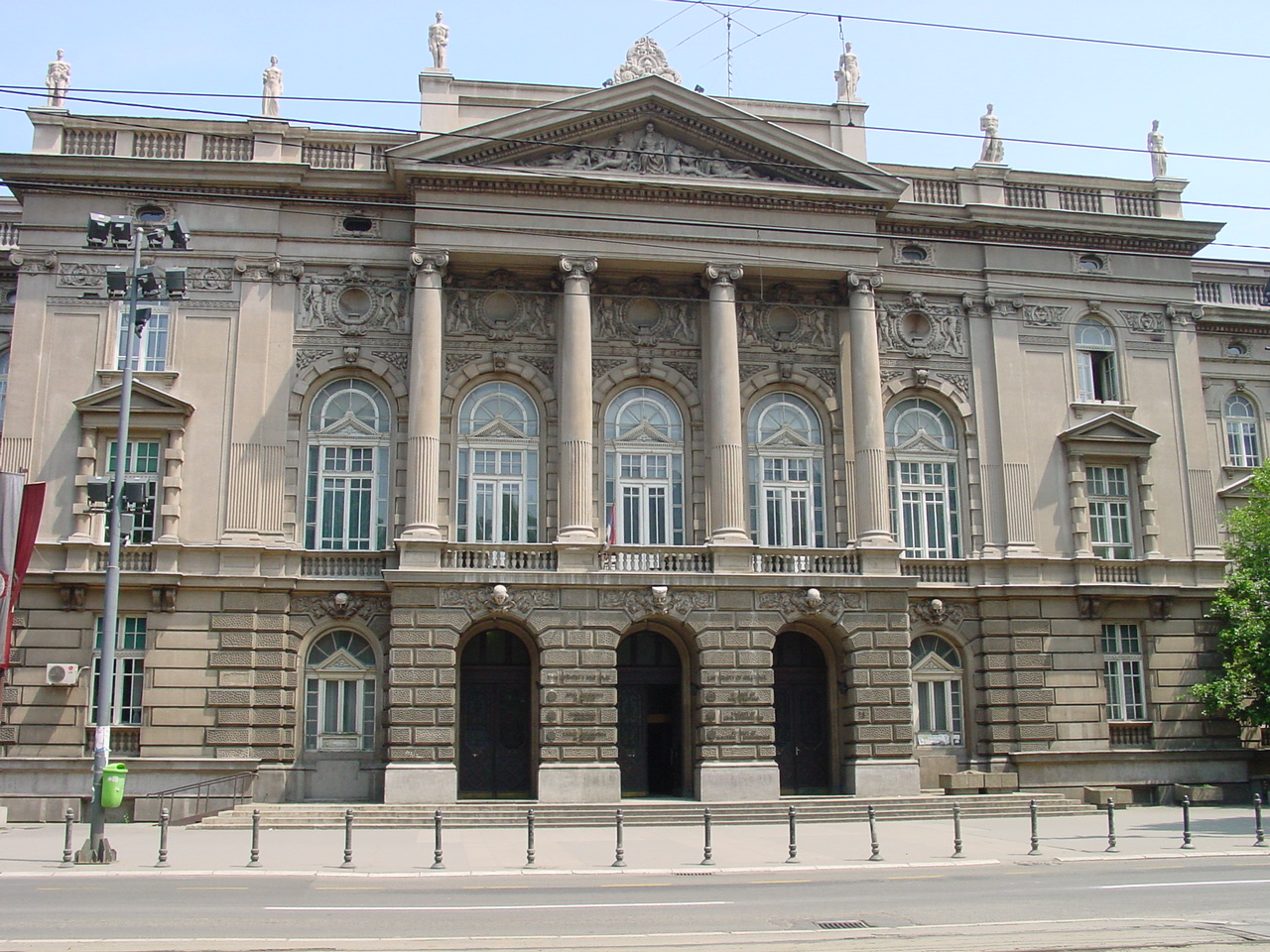 University of Belgrade – Faculty of Architecture

History of the Faculty of Architecture

The earliest steps in the history of teaching architecture in Serbia can be traced back to the first half of the 19th Century. Among many other subjects on the curriculum, the Department of Philosophy of the Lyceum offered a single course in this field titled Civil Architecture, which was almost certainly of a general educational nature.

The Lyceum was later joined by the Engineering School, which was formed in Belgrade on the 19th of June 1846 according to the Julian calendar. The school had five courses in total: Practical Land Surveying, Mechanics, Architecture, Reading (Writing) and German. The Act on the Establishment of the Engineering School, which set out the curriculum and details of teaching, was signed by Prince Alexander Karadjordjević. Since the Engineering School, as its very name suggests, was clearly geared towards turning out future architects and its curriculum followed the logic which still shapes the way architects are educated today, the 19th of June 1846, or the 1st of July according to the Gregorian calendar, is traditionally considered to be the starting date of higher education in architecture in Serbia and continues to be celebrated with joy.

Under the Law of 24 September 1863, the Higher School, with faculties of law, philosophy and engineering, became the highest educational institution in the country. Studies at the Faculty of Engineering lasted four years, but architecture still had to fight for its place among a range of courses such as National Economy, Political Calculation and the like. Significant roles in promoting courses related to the architectural profession and building in general were played by Emilijan Josimović (1823-1897) and Mihajlo Valtrović (1839-1915). With their keen interest in many of the finer points of architecture, they are both credited with getting students more interested in the architectural courses.

Mihajlo Valtrović was the first graduate architect who worked as a teacher. All of his many activities were directly linked to promoting the teaching of architecture. He initially taught a course with a complex subject matter which included the fundamentals of architectural design and building structures, as well as architectural styles. After that classes began to branch out and some courses went further in depth, but the key milestone was the establishment of the Office for Architecture at the Faculty of Engineering, which later evolved into the Architecture Department.

On the 27th of February 1905, the Assembly of the Kingdom of Serbia enacted the Act on Universities, which divided the Faculty of Engineering into departments for civil engineers, architects and mechanical engineers. Studies at the department lasted eight semesters and the curriculum was large, featuring as many as thirty-eight courses. The study programs of these courses were up-to-date and closely matched those offered by similar schools in Central Europe.

The first long interruption of the classes occurred in October 1912, followed by many other intermittent disruptions until the end of World War II. In 1932 the Faculty of Engineering of the University of Belgrade moved into a new building, purpose-built for the needs of all of its three departments, situated in today’s Bulevar Revolucije Street on the site of a former racetrack. 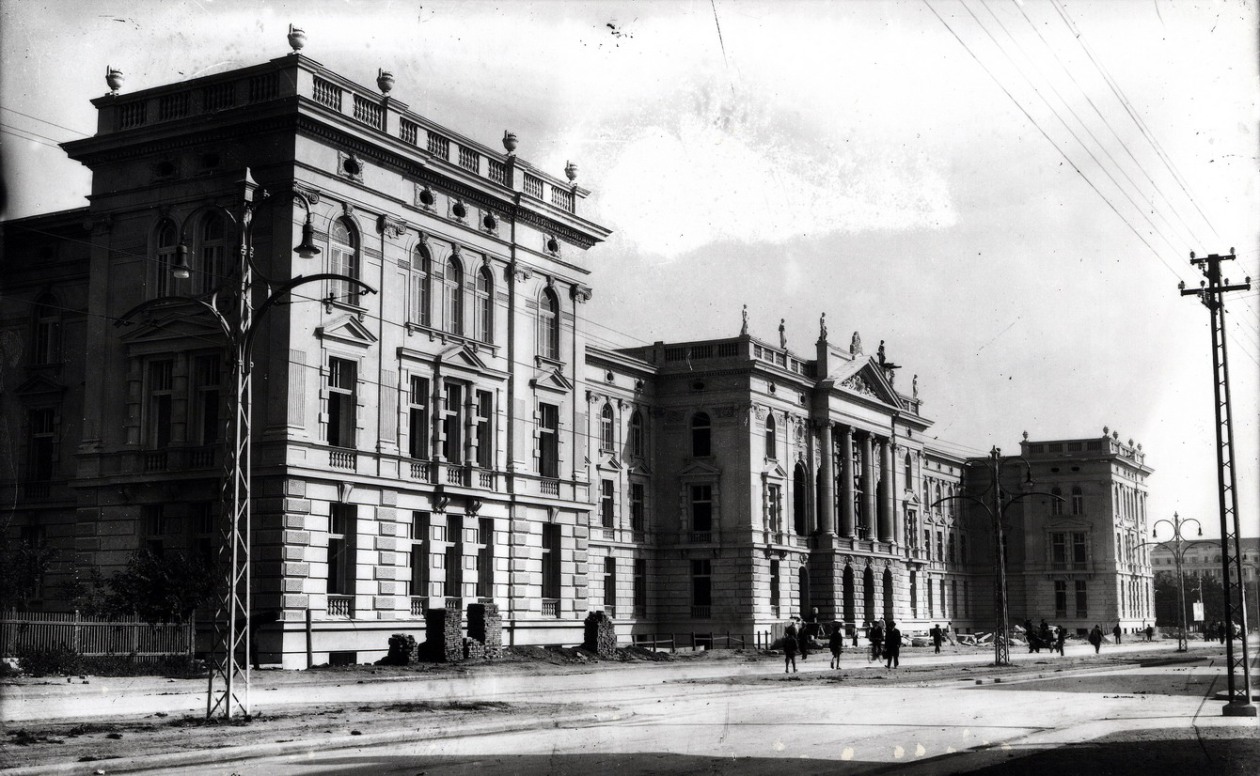 The Regulation of the Faculty of Engineering passed in 1935 introduced a number of changes to the Architecture Department. In addition to the new teaching curriculum, it defined students’ responsibilities related to graphic papers, sitting of examinations, entry examination and final professional examination. The Regulation provided for the establishment of the Assembly of Teachers of closed disciplines, the forerunner of today’s Departments, as well as bureaus and cabinets.

During World War II, the work of the Architecture Department stagnated. After the War, the building was restored to a functional condition and lectures were resumed in August 1945. The Faculty of Engineering was spun off from the University at the end of 1948 and transformed into the Technical School with six independent faculties, one of which was the Faculty of Architecture. The curriculum relied on the pre-war courses structure, but numerous changes were set afoot, albeit at a different pace depending on the department and the type of study courses.

The Technical School was abolished in 1954 and the Faculty of Architecture as an autonomous institution became a part of the University of Belgrade. Since then, is has undergone numerous internal changes and teaching reforms to date, but the integrity of the only educational institution in the field of architecture in Belgrade has been preserved.

A conclusion that can be drawn from this brief and concise historical overview of higher education in architecture is that the path chosen from the very beginning has been a gradual one, starting with the introduction of one course and the progressively expanding the programme, and in the process educating not only architects, but also the society at large to follow and accept new architectural forms, styles and facilities.

History of the building

The building of the Faculty of Engineering was the first purpose-built building constructed in 1925-1931 after the design by the architects Nikola Nestorović and Branko Tanazević. It still serves its original purpose, housing three schools of engineering. 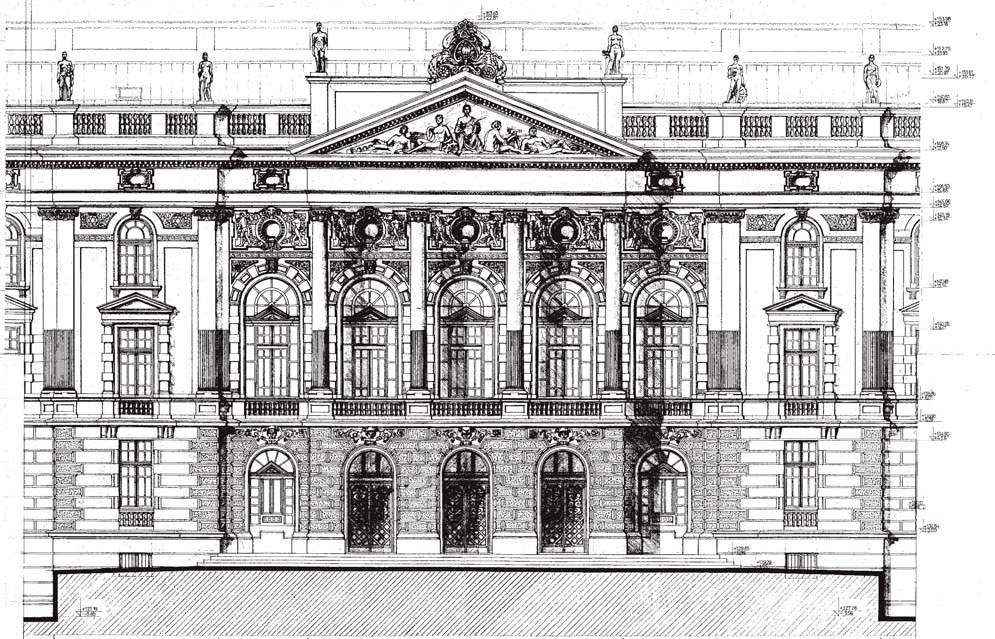 After World War II, the building received a third storey after the design by Mihailo Radovanović. Situated northeast of the University Library, it was conceived as a free-standing structure arranged around four inner courtyards in a dispersed layout. Designed in the style of academism with predominant classicist features, it is monumental in size and shows an exterior abounding in decoratively used architectural elements and ornaments.
Special attention was paid to the front, with less emphasis on the flanks, while the courtyard-facing façades display the simplest decoration. The front is dominated by the central frontispiece with monumental stairs leading to a triple entrance.
The sculpture in relief and in the round on the front was carved by Ilija Kolarević and Ivan Lučev, while the decoration in artificial stone was done by Bedřich Zelený.
The building has considerable architectural, stylistic and townscape value as one of the most important works of two eminent architects, a distinct example of academism in terms of form, and one of the most prominent structures of the university complex. As the first building purposely designed to accommodate a school of engineering, it has cultural and historical value. 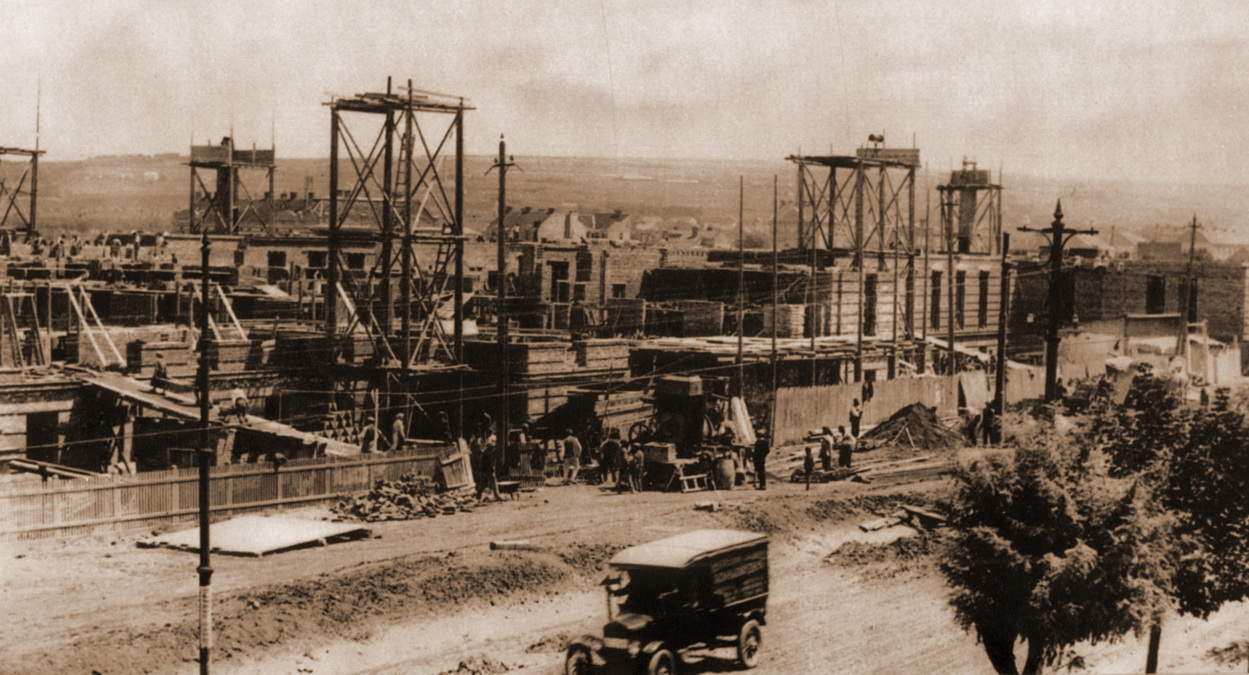 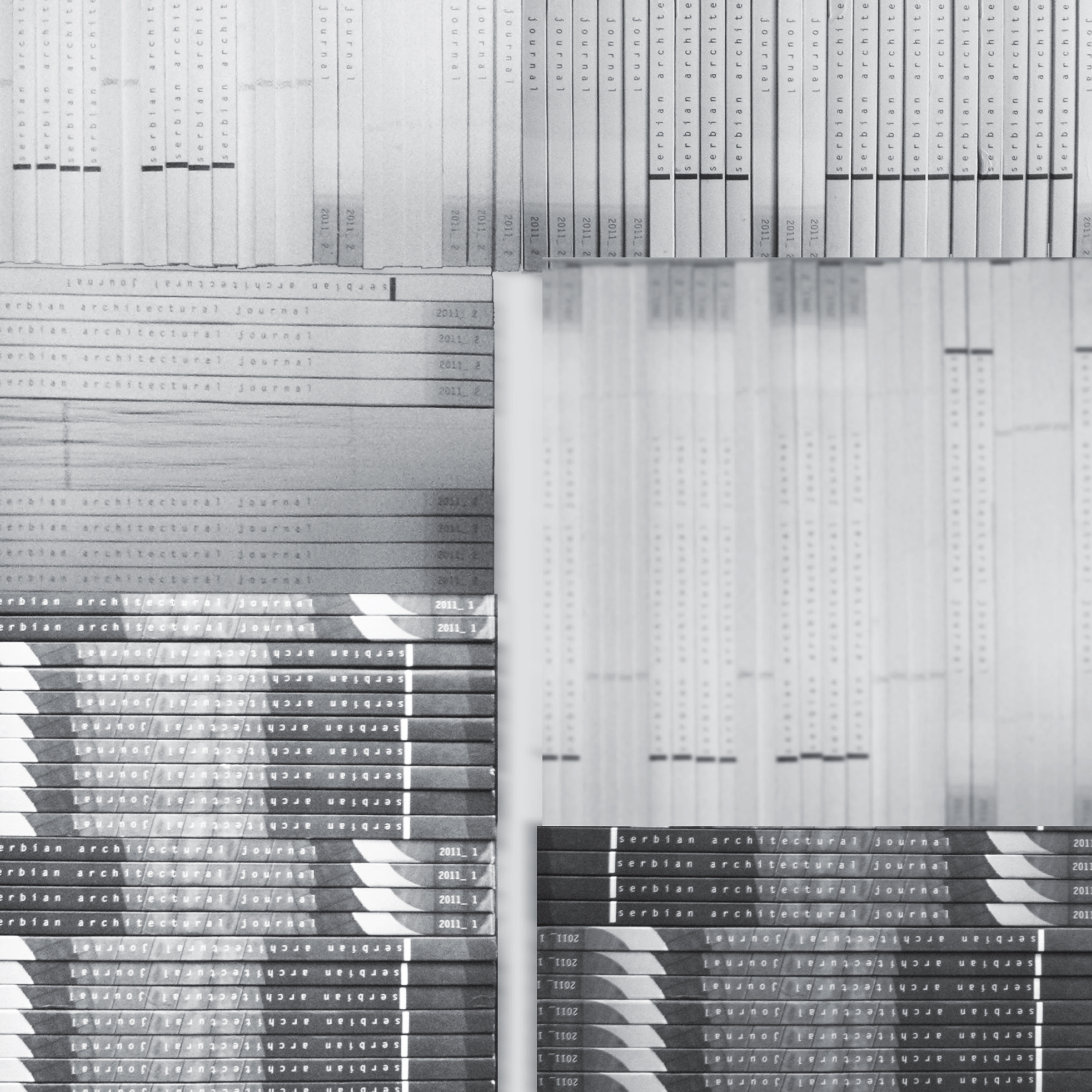